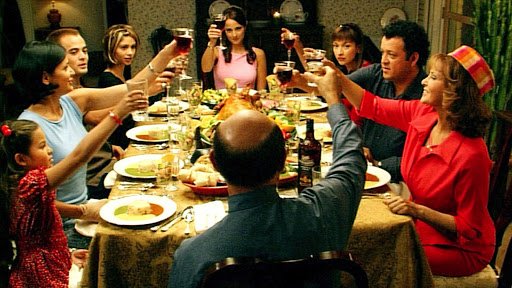 I love this film. The characters, the atmosphere, the conversations, the food—I love everything about it.

Set in Los Angeles, Martin (Hector Elizondo) is a Mexican-American Chef and widower. He has tried to raise his three daughters and attempt to instill in them a respect for their cultural heritage.

One sacred tradition is Sunday dinner at the family home, where Martin cooks a big, beautiful meal. Around the table, the family shares their lives.

The problem is, ever since the death of his wife fifteen years earlier, Martin can no longer taste his own creations.

Hector Elizondo is a joy to watch as Martin. He’s one of my favorite character actors, and one of the best out there. His role as the hotel manager in Pretty Woman is one of my favorite things about that film. His warmth lept off the screen. It does here, too.

In Tortilla Soup he has much more screen time, yet I still wanted more of him.

The sisters (Jacqueline Obradors, Elizabeth Peña, and Tamara Mello) are brilliantly cast. Each brings a unique complexity and personality to their role, but they maintain a familial bond that feels genuine and true.

The legendary Raquel Welch as Hortensia is over the top perfection.

Tortilla Soup is fresh & exciting. Energetic & bold. But it’s also thoughtfully tender. These characters love each other, and those relationships light up the screen.

And this might be odd to say, but the movie is kind—not only to its characters, but to us. An hour after you see it you’ll catch yourself still smiling about it. We don’t get many movies like this anymore.

I have always liked the simple symbolism food can provide in a film. Spicy, sweet, bitter, robust, savory—Tortilla Soup has it all.

See it and savor it, just like a good meal.