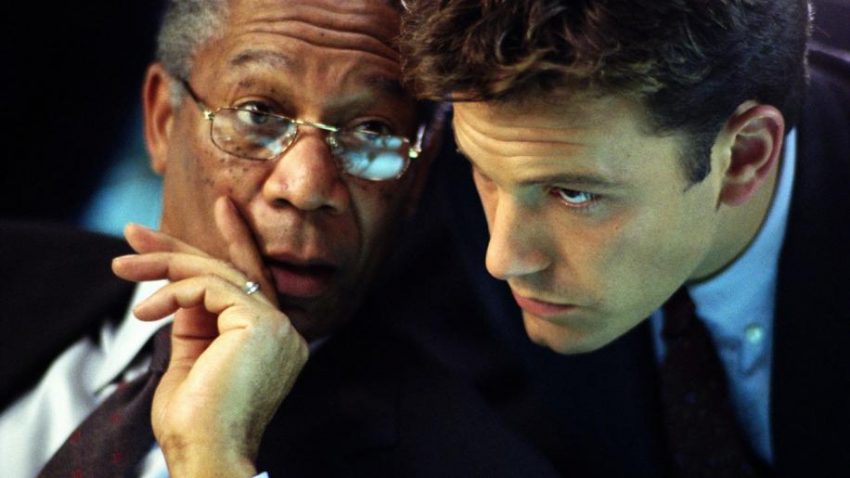 The Sum of All Fears Movie Review

The Sum of All Fears is the fourth outing of Tom Clancy’s CIA hero Jack Ryan, previously played by Alec Baldwin (The Hunt for Red October, 1990) and Harrison Ford (Patriot Games, 1992 and Clear and Present Danger, 1994).

It is now eight years later and the Jack Ryan torch has been passed along to Ben Affleck.

How can Affleck play a character already so well established by Ford while being 30 years Ford’s junior? Well, chronology really should mean nothing to these movies. They haven’t to the Bond films in almost 40 years.

The film opens in 1973. An Israeli jet goes down in a Middle Eastern desert carrying a nuclear weapon.

Flash forward 29 years and we see the weapon unearthed and sold by peasants to anyone interested in a “dud” of a bomb, not knowing what it is they have their hands on. The buyer? A terrorist. His plan? Instead of taking on Russia or The United States with his weapon, he devises a plan to use it against the U.S. while making it appear to have come from the Russians, encouraging the two superpowers to fight against each other instead of taking them on himself.

We meet Jack Ryan (Affleck) working in the historical department of the CIA. A year previous he had published a paper on a powerful Russian who has now taken office after the death of the former President. With his deep understanding of this man (similar to Ryan and Captain Ramius in Red October), Jack Ryan is called into the upper levels of the CIA by Bill Cabot (Morgan Freeman) to offer facts about this new man no one knows much about. He is soon entangled deeper in this web as Cabot develops a fondness for Ryan and his knowledge.

Divulging any more of the plot would take away from the dramatic impact of the film, which is what it needs to build, so I will not go into further detail. It is safe to say this, however. After the events of September 11th in the United States, everyone will feel the pain and devastation this film attempts (and succeeds) to convey.

I was surprised at how much I liked Ben Affleck in the role. I was very hesitant when I first learned he would be playing the part. To me, he has always been an average actor who liked to ham it up on-screen, but in this film, he shows what he is capable of. He has truly grown. He creates a believable character in Jack Ryan and has made him someone we care about on a different level than Harrison Ford or Alec Baldwin had done. There is an innocence there that neither Ford nor Baldwin could convey. Ben Affleck is Jack Ryan.

In the first half of the film, he played the character as a very average guy. He has some wonderful scenes involving his girlfriend and plays them low-key, yet just enough to give us glimpses of who Ryan is in his personal life. The side we had only seen glimpses of in the past. As hour two rolls in, he shows his dramatic side beautifully. Not so much in what is said, but how he carries himself and in his mannerisms. He can truly carry this film.

Morgan Freeman does what he always does: he delivers a high-caliber performance. He consistently proves film after film why he is one of the greatest American actors we have today. This guy truly is a treasure. The subtle characterizations he adds to his characters are simply remarkable. Pay particular attention to a scene when Ryan is on the phone explaining to his girlfriend why he missed their dinner date. Freeman is priceless.

The Sum of All Fears is exceptional on many levels. Many will see how closely it hits home with the events of September 11th still fresh in our minds. It gives us someone and something to cheer for. Ryan is the epitome of the American Soldier. A symbol of what I feel is the good in our country. Freedom, bravery, and the well-being of its people.

I’ve seen many criticisms over the number of scenes involving Ryan and his girlfriend, saying they are unnecessary or pauses in the development of the plot. I disagree. How else can we care about what it is this man is standing for without seeing what life he lives and is trying to protect? They are not pauses in the plot; they are necessary for the development of his character.

This is not an action film, but a dramatic film in need of this type of detail. The action it contains is there for dramatic impact, similar to Saving Private Ryan, where the images won’t make you sit in your seat and think, “That was cool.” They will affect you on a different level, especially considering the volatile state the world is in right now.

Jack Ryan symbolizes what every American hero has stood for, from Abraham Lincoln to Rosa Parks. Bravery, determination, courage, and the desire to make the world a better place.

In my eyes, Jack Ryan represents and honors the best of all of our American heroes.