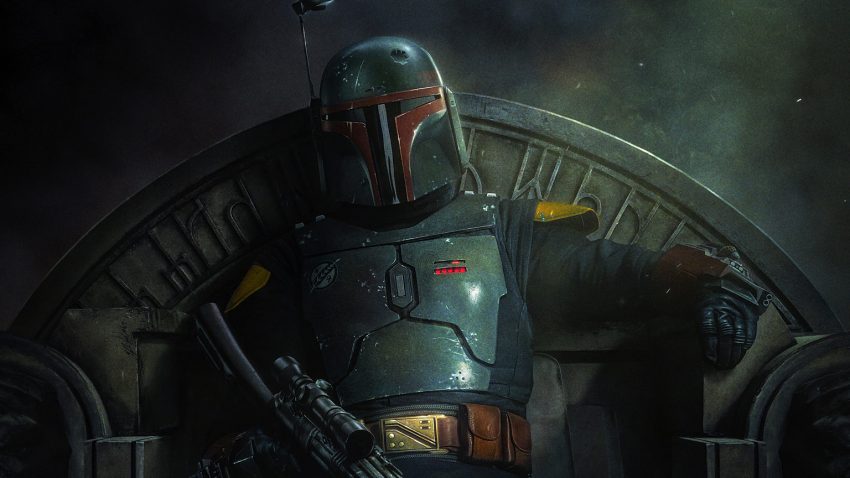 The Book of Boba Fett review may contain SPOILERS for anything and everything Star Wars related through February 2022.

This isn’t something I needed.

The Book of Boba Fett isn’t something I needed. We watched Boba Fett die in 1983. I didn’t look back.

I know a lot of fans wanted a Boba Fett stand-alone story for years, but he was never a compelling character to me. He was a cool side character with a history shrouded in mystery, and at 10 years old, that was all I needed. I think he works better the less we know about him.

To me, the infamous rocket-firing action figure was more an engaging legend than his actual character.

The Beauty of Star Wars Side Characters

The Star Wars universe is full of wonderful side characters going about their business. The world feels dense and real. Some get more screen time than others, some pass by in a blink. But they all do one thing: they engage our imagination.

That’s part of why the Star Wars action figures I grew up with were so much fun. We gave characters our own stories and created our own adventures.

There are a lot of characters in Star Wars, but not all need their backstories spelled out. Even the ones who look cool.

When you flesh out characters that were never meant to be, they get spread thin. They can become stupid.

When you find out who they are, what they do, and what makes them tick, sometimes you find out they’re just, well—boring.

After watching this series, I still believe that.

Let’s Get On With It: The Review

The Book of Boba Fett is an entertaining mess. I don’t even know what this show wants to be, exactly. It fails at being an engaging Boba Fett TV show, but it did deliver some pretty amazing episodes I didn’t see coming. And I learned some things that enhance my enjoyment of the universe.

So it’s not all bad, right?

The Problem With Boba Fett

First and foremost, I didn’t care for this interpretation of the Boba Fett character. It works to his detriment. He didn’t need to be more than the bounty hunter who took Han Solo in The Empire Strikes Back (and briefly in Return of the Jedi). Sometimes less is more.

Temuera Morrison is a great screen presence, but his Boba Fett performance here is different than we saw in The Mandalorian Season Two.

In The Mandalorian, he was a mysterious, badass warrior at the top of his game.

Here, Boba sometimes feels like an over-acted caricature. The cadence of his dialogue delivery even feels odd. The tone of the character feels off. He feels bland and boring. He seems past his prime.

Structurally, the flashbacks are unnecessary. Bring us into the story and move us forward. Enough with the non-linear storytelling. It makes the story confusing for no reason. Did the time jumps serve a purpose? Not really. Jump forward years at a time each episode, if need be, but move the story forward in time.

Season One of The Witcher also caused confusion by jumping around in a non-linear fashion. Flashbacks and time jumping have been done to death. They don’t magically make a story more interesting.

The series should also include the scene where Boba kills Bib Fortuna. It’s necessary to the set-up of this show, so should be included here. The way it is now, you need to have seen that moment in The Mandalorian Season 2.

Expand on it. Turn it into a bigger moment for the series. Instead, we’re left with a pivotal moment for The Book of Boba Fett, relegated to an end-credit scene from the season of another show. That feels strange.

Star Wars has its share of humor, but comedic characters don’t work well in the Star Wars universe. This is why Jar Jar Binks was so negatively received in Episode One: The Phantom Menace.

Truth be told, I wasn’t bothered so much by Jar Jar—I had other issues on my mind. But I digress.

A comedic character’s tone brings us out of the moment and breaks the magic. The characters played by David Pasquesi and Amy Sedaris are completely out of place here. Nothing against them, but their characters would feel more at home in Guardians of the Galaxy or another Marvel flick. In Star Wars, the humor doesn’t work.

The Last Jedi had a similar problem, but that’s a much longer discussion for another day.

The slow-ass speeder chase in Episode 3 was what-the-fuck, Canto Bight level cringe. Good God. This might be the worst action scene in Star Wars history, which is the only reason it bears mentioning. It’s like the speeders were being driven by kids who couldn’t get them out of first gear.

And Hutts should be practical puppets. End of story. Did we learn nothing from the CGI mistakes of the Prequels?

A Breath of Fresh Air

And while I’m not complaining, dedicating two full episodes to Din Djarin (The Mandalorian) was completely jarring when I expected a show about Boba Fett. Dropping The Mandalorian Season 2.5 in the middle of The Book of Boba Fett highlighted the show’s faults by contrast.

When Din Djarin appeared, I sat up in my seat. It was a breath of fresh air. When I heard Mando’s theme, I got excited. And when we returned to Boba Fett’s storyline, I was bummed out.

It’s sad when the best parts of a show are the special guest stars.

Don’t get me started on the battle for control of Mos Espa and Tatooine that involved two Scorpenek droids (Thanks, Wikipedia), a Rancor, and about 50 people, tops—including the much-needed folks from Freetown that amounted to no more than 10 additional fighters.

“Without them, we’re done for!”

Without question, the scenes with Luke Skywalker were my favorite moments in the show. They’re moments I’d dreamed of seeing since I was a kid in the 80s. They weren’t perfect, but I got lost in them in a way I didn’t expect.

When Jedi Master Luke Skywalker showed up at the end of The Mandalorian Season 2 to get Grogu, I was underwhelmed. I appreciate what they tried to do, but the CGI work took me out of the moment. (See, Grand Moff Tarkin and Princess Leia Organa in Rogue One: A Star Wars Story.)

In The Book of Boba Fett, the CGI Luke Skywalker looks good. Not perfect, but it is leaps and bounds better than before. It worked for me. Effects are important, and it can be a fine line between what works and what doesn’t. Our eyes and brain can be tough to trick with digital creations. This Jedi Master Luke captured me and held my attention. He didn’t have me feeling ten years old again, or anything, but the scenes were engaging.

The only negative I’d mention is his voice. It sounded flat and monotone. It was certainly added in post-production, but it didn’t feel like it existed in the same space as the other characters. But that’s a minor quibble.

Din Djarin and the Darksaber storyline propelled his story forward. It gave us an idea of where his next season will go. I like it. Great stuff to look forward to.

The two Mandalorian episodes were the highlight of the season, that’s for certain. But that’s not to say the main Boba Fett storyline didn’t have some decent moments.

I didn’t like the use of flashbacks as a storytelling device, but the flashback storyline should have been the focus of the series.

Boba’s escape from the Sarlacc pit and being imprisoned by the Tuskens, learning their ways, and becoming a member of the tribe—that was great stuff. Those flashbacks engaged me. Lots of great characters and moments that built up and paid off. Expansion of the Tusken culture imbued depth that made them richer and more engaging. I wish the show had lingered there longer.

The effects in the final episode were phenomenal. Aside from my thoughts on the weight and scope of the big battle, the rancor looked incredible. And the jetpack flying effects were dynamic and exciting. Unfortunately, I was more excited by how good the effects looked than by what was happening.

All around, Star Wars properties are raising the bar again in special effects. It’s good to see that tradition continue.

(Note to Jon Favreau and Dave Filoni: No more CGI Hutts—give us a puppet next season to cleanse our palette.)

The Book of Boba Fett Review: In Conclusion

This show felt like it wanted to be what Marvel did with their team-up series, The Defenders, instead of a season devoted to Boba Fett.

But again, it feels like it didn’t know what it wanted to be.

The Stories of Boba Fett would have been a better title. It allows for a more flexible collection of stories and episodes.

If Disney Star Wars is your thing, don’t listen to me—you’ll no doubt enjoy the show. For me, it was a mixed bag. The shows led by Jon Favreau and Dave Filoni have been, hands-down, the best live-action Star Wars we’ve seen since Return of the Jedi. To many, including myself, Dave Filoni is the true heir to Star Wars, and he proves that over and over again. Favreau is right there too. They get it.

This show was a misstep, but one with some wonderful nuggets. It’s not bad, it’s just confused.