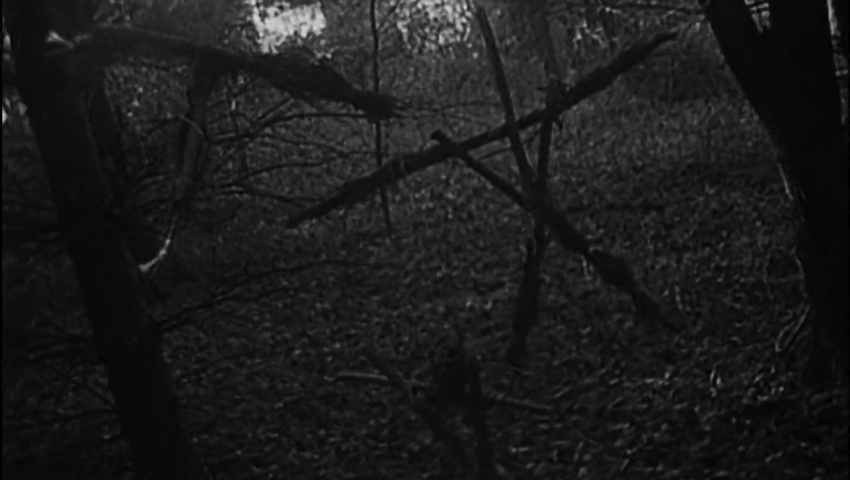 If you’ve not yet seen The Blair Witch Project, don’t read ahead. It will spoil some important elements that will affect your experience.

I’ve just seen The Blair Witch Project and I’m trying to form solid thoughts on what this film did to me.

Everything I had heard was true, to a certain extent. It was a film unlike anything I had seen before and it took me beyond the screen into a world I had never been before.

Mind you, I hate the woods. They freak me out, so I knew going in that this would probably scare the crap out of me. It didn’t disappoint.

The Blair Witch Project completely enveloped me and frightened me to my core. I have to admit, the final 20 minutes I sat in my chair with my hand over my mouth, shaking, my heart racing, and my breathing heavier than it ever has been while watching a film. No lie.

Did the movie scare me? No, it did not. It terrified me. It was like watching a living, breathing version of my worst nightmare, right up through the film’s final frames. Then it ends, as abruptly as a nightmare. Like startling yourself out of sleep because the dream is too frightening.

The film, as any who have followed the media coverage will know, revolves around the story of three young filmmakers (Heather, Josh, and Mike) who go out in the woods of Burkittsville, Maryland. Armed with a 16mm movie camera and digital video camera, they plan to film a documentary about the mysterious Blair Witch, a local (or maybe not-so-local) legend.

They disappear. One year later their footage is discovered under the foundation of a 100-year-old deserted cabin in the woods. The footage documents their fateful last days and their slow deterioration into insanity. They get lost, determine they may never find a way out, and discover strange happenings which would make anyone want to get the hell out of those woods.

It’s an effective and subversive experience

The film works because it seems completely real. Going in, I thought it was. There were flyers on the theater doors and being circulated in the lobby beforehand. It was only afterward we realized we’d been duped by some very clever marketing.

The use of the camcorder and 16mm film is haunting. You have several of the shots you would find in any one of your homemade films: extreme close-ups, bad framing, shaking cameras, out-of-focus shots, and many shots that are under lit, sometimes completely dark.

All of this adds to the realism the filmmakers were going for and, let me tell you, it worked. There is not one second I didn’t buy into the fact that these were real people and this footage was authentic. If I didn’t buy into that, the film wouldn’t have worked the way it did.

You begin to care for these kids and you find yourself talking to yourself, trying to reassure them. Trying to help them, but you can’t. You feel completely helpless.

Not many films scare me. I love horror movies and rarely do they get into my head. Movies like The Silence of the Lambs, The Shining, The Exorcist, and The Evil Dead have come closest. Mind you, these films might have scared me, but none terrified me. The Blair Witch Project did.

Seen under different circumstances and knowing it’s fiction would have affected my experience. I’m glad to have seen it before the secret was well known. It made for one of my most memorable movie-going experiences to date.

I swear to God, I thought it was real.

Reviewer’s Note: I saw The Blair Witch Project before I knew it was fiction. This review is written based on how I felt after seeing it at the Uptown Theater in Minneapolis—and believing it. After the screening, we found out the truth.