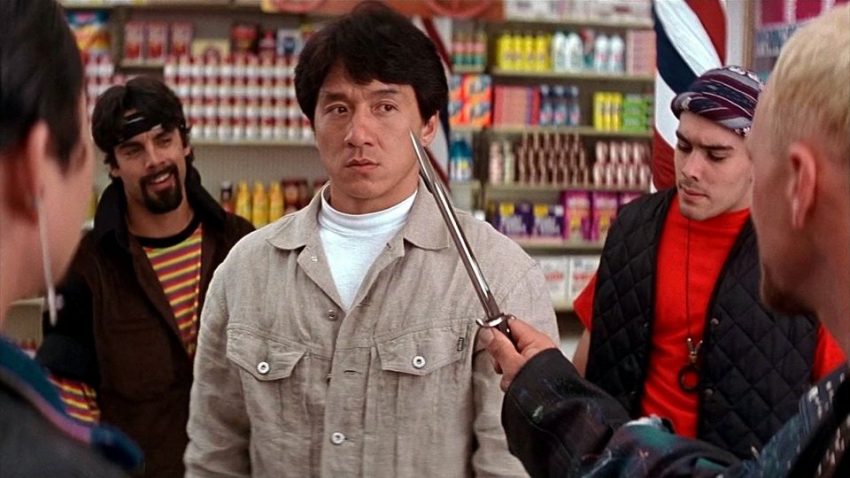 Rumble in the Bronx Movie Review

The only exposure I’ve had to Jackie Chan before seeing Rumble in the Bronx was seeing him in The Cannonball Run and Cannonball Run II when I was a kid. Fun movies, but pretty brainless.

I’d heard he does all of his own stunts, saw that he had a pretty corny sense of humor, and knew he could karate-chop the shit out of someone if he really wanted to.

Well, Rumble in the Bronx proves all of these things. And the movie did it all in a way that was very endearing. I walked away thinking I’d seen one of Hollywood’s newest faces, knowing damn well he’s been around for years.

I really liked this guy.

I’ve got to give credit where credit is due. The action sequences, choreographed by Jackie Chan himself, were outstanding. Everything moved so quickly it was a miracle everything came out right. Refrigerator door opening here, grocery cart there, and a walking cane under his foot here. He makes the action so fresh, it’s like seeing a fight scene for the first time.

Another quality that made this movie so endearing was his gentle sense of humor. You laugh at what basically is an exaggeration of yourself. He does everyday things and blows them lightly out of proportion. You end up laughing because you know you’re guilty of doing it yourself.

It’s more than a karate movie

Rumble in the Bronx is karate movie, but it is much more than that. Yes, there is some bad dubbing and the acting is nothing to be desired, but that is what adds to the charm of the finished product. It creates an atmosphere where you can laugh at it’s imperfections. They become part of the experience.

But the movie also gives you some fantastic, fresh surprises, like a car chase involving a hydro plane and some kick-ass action sequences. Which, face it, is the reason everyone was there anyway.

I really enjoyed myself and walked out wanting more. I wish I had first discovered Jackie Chan earlier than The Cannonball Run.

Jackie Chan is a wonderful presence with a unique sense of humor, genuine heart, and he’s a talented stunt choreographer and performer. I can’t wait to seek out more of his work.

Rumble in the Bronx provides some hearty laughs and good old-fashioned ass-kickin’. It was everything I needed to have a great time.