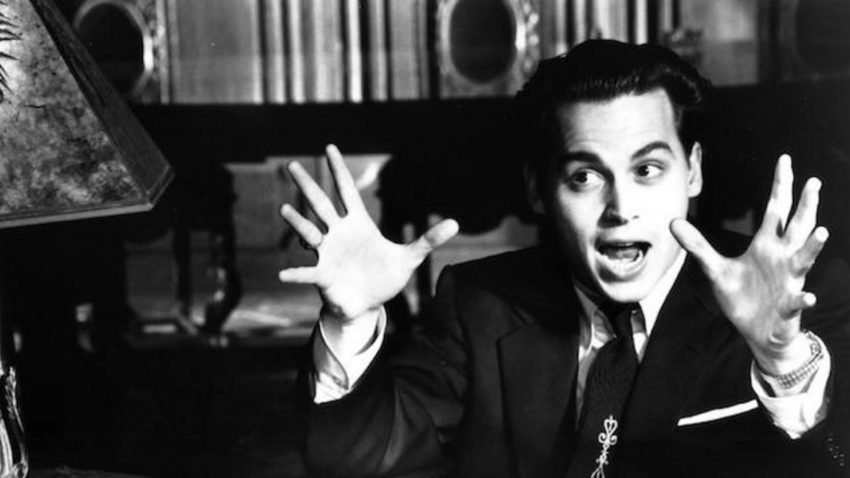 Ed Wood is a stylish and visually stunning tribute to old Hollywood and the American spirit.

The film chronicles Ed Wood‘s life, from how he talked a low-budget movie executive into letting him direct a movie about cross-dressers, to his self-proclaimed masterpiece, Plan 9 From Outer Space.

Most of the film is a rare sneak peek of a “genius” at work. Taking a quick shot on the street then running from the police because they didn’t have a permit. Looking for financial backers for a film that could resurrect the career of Bela Lugosi. Leaving noticeable blunders in his films because he felt people wouldn’t notice them. Stealing props from warehouses for use in his films. And many more. Too many to mention. But all of which make the film extremely entertaining.

Johnny Depp plays Ed as a person who has great respect for the classic films of his past and for the actors who played in them. He has you believing that he is going to direct a film that will make a difference. His enthusiasm for filmmaking is almost contagious. Having an interest in filmmaking myself, I found myself getting excited about the process and anxious to make a film myself. Johnny Depp does an outstanding job with the role and plays the role on the verge of being a caricature, but pulls back just enough to make him believable.

Martin Landau* is the person for which I will be most upset if he is not recognized at Oscar time. His portrayal of horror legend Bela Lugosi is tremendous. Aside from looking uncannily like Lugosi, he has his Hungarian accent perfect along with Lugosi’s hunched walk, bitter feelings for Hollywood, and his doomed sense of loneliness. His performance is so outstanding you would swear they used old documentary footage of Lugosi for the film. I don’t have words to describe how impressive his representation was. It is truly outstanding.

One more appearance in the film that deserves mentioning is Vincent D’Onofrio as Orson Welles. I won’t say why he’s in it, but keep an eye out—it’s special.

The only real relationship that is built on throughout the film is that between Lugosi and Wood. Lugosi began to depend on this young man for his future—a future he was on his way to ending with drugs and alcohol. Wood had genuine affection for his fallen idol and cast him in any film he tried to make. He even admitted Lugosi to drug rehab to help him get his life back in order, making him the first celebrity to admit themselves to a hospital for that purpose. Wood even offered to give up everything he had to keep Lugosi under the care of the doctors when they found out his insurance was out of date. Ed truly cared for Bela.

The making of Plan 9 From Outer Space

The segments in the film that I most anticipated were the scenes involving the making of Plan 9 From Outer Space. I wanted to see how they explained the bloopers and blunders left in the film and what reason they had for their existence.

It was simple. Ed felt that no one would notice.

He thought they would be so wrapped up in the story to see the strings attached to flying saucers. Or how it could go from day to night in one uncut scene. Tombstones made of cardboard toppling over. Stock footage of World War II used to stage an attack by Earth on the flying saucers.

They would overlook horrible dialogue and card tables used for computer consoles on a spaceship. Curtains used for walls on the alien mother ship. Lugosi’s double, after his death 4 days into filming, that stands a full six inches taller than Lugosi and walks around with a cape over his face to hide his identity. Duplicate footage of Lugosi walking out from the same forest almost 5 times in the film.

And the overly dramatic voice of Criswell, Plan 9‘s narrator.

All of which are obviously visible to the average viewer.

But dammit if Ed didn’t think he’d created a masterpiece.

As a whole, I enjoyed the film completely. It gave me a better understanding of Wood, but mostly of Lugosi for whom I came away having much sympathy.

I think they sum up what the movie says in my favorite line from the movie.

They are waiting to shoot a scene involving Lugosi with an octopus.

Lugosi comes walking down a hill and says, “OK—let’s shoot this fucker.”