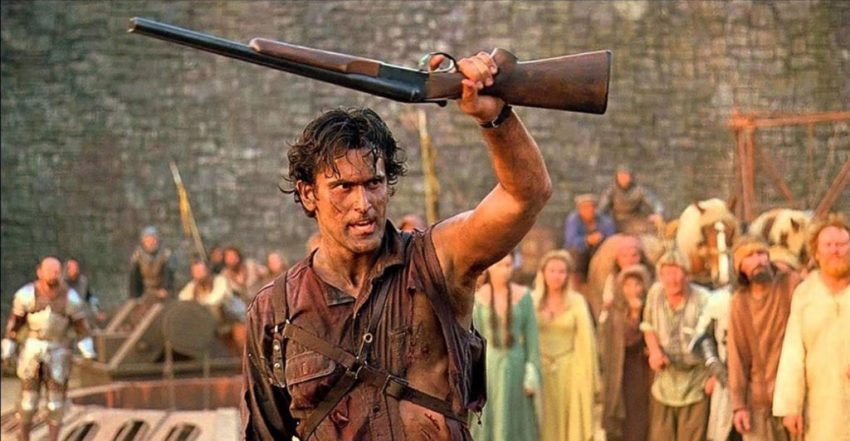 When Sam Raimi filmed his horror flick Evil Dead several years ago on a meager budget, I don’t think he ever could have realized the directions he would have taken with the sequels. In fact, I doubt he thought he’d have the opportunity to make one sequel, let alone two.

His small horror movie, Evil Dead, was a gore fest back in the early ’80s. It has since risen to be one of the biggest films in the college circuit since The Rocky Horror Picture Show. It has now spawned two quite large budget sequels, both quite different than the film before it.

Evil Dead, as I mentioned, is your basic horror movie. Kids go to a cabin in the woods, get attacked by evil beings, all after reading passages from something called “The Book of the Dead”.

Go figure, right? Horror movie characters have never been accused of being too intelligent.

Evil Dead 2: Dead by Dawn is the second film, released in the theaters in 1987. It was a very similar story to the first, just told on a larger budget, but it’s also an intelligent comedy. It crosses the scariest movie you’ve ever seen with some slapstick humor and the Three Stooges.

Finally, the year is 1993 and we get the third entry: Army of Darkness.

Army of Darkness is like nothing I’ve seen before. It’s a comedy that’s a satire of the Evil Dead movies, medieval films, time travel pieces, and the horrible one-liners that many of today’s action heroes use.

The funny thing is, while they’re making fun of really bad movie one-liners, they come up with a shitload of really funny ones themselves.

At the end of Evil Dead 2, Ash was sucked into a hole in time. He reappeared in what seems to be a time when kings still ruled and evils possessed the woods. An evil with which he has become all too familiar.

His mission? To acquire “The Book of the Dead” for the town, after which they can send him back to his time. Over and done. There is the story. Pretty basic stuff.

The humor is so corny you find it hard to believe Bruce Campbell, the star of the film, could say his lines with a straight face. He is the only actor whose character, Ash, has appeared in all three of the films. He plays his character with a certain cool cockiness. This guy has seen and done it all. From killing his possessed girlfriend to chopping off his possessed hand, this guy has done the unimaginable.

There are many scenes of stop-action animated skeletons which reminded me of the Golden Voyage of Sinbad movies I would watch as a kid on New Year’s Eve. The comedy is very reminiscent of The Three Stooges. In fact, not only reminiscent but in some cases total recreations.

Army of Darkness will most certainly become a classic. It’s a throwback to old-style horror moviemaking and it’s a hell of a lot of fun. It’s a movie I’m sure the filmmakers had just as much fun making as we have watching it. They don’t make movies like this anymore.

Just when you’re least expecting it, Hollywood will allow a movie past its gates that transcends itself. Who knows, maybe Raimi has another sequel up his sleeve. Until then, I’ll sit and enjoy the hell out of this installment.