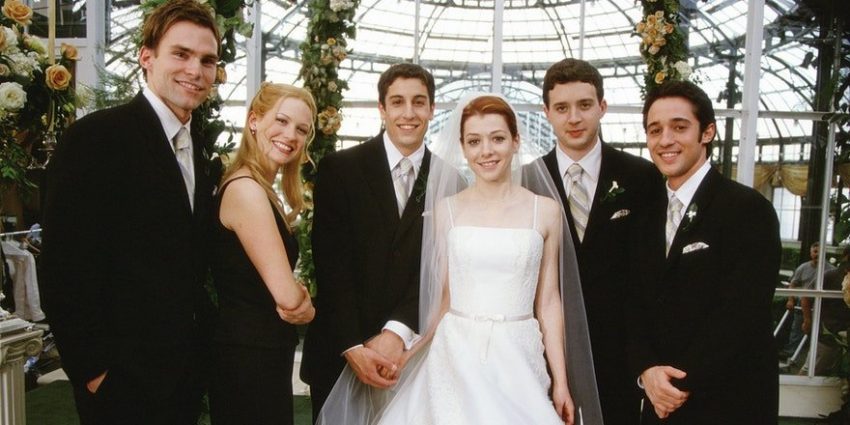 Throughout a film series, you begin to care about the characters more and more with each entry. They become more human. You can identify with them. They become like people you know. Like friends.

In American Pie, we laughed because we related.

Then, in American Pie 2 we laughed because we remembered.

Finally, in American Wedding we smile because we’ve grown to appreciate those times.

With each entry, the further down the road of life we all get. And the more we laugh and smile with fondness at our memories.

With maturity comes a feeling of nostalgia when you reminisce about your youth. Everyone’s life is different, yet holds a familiarity that everyone can relate to. This is what the American Pie movies have done so well. We laugh at the characters because they are, were, and could be, any of us. The jokes are funny because they are us.

It’s all about the characters.

American Wedding takes us to the next level in these characters’ lives. There is a certain maturity felt throughout the movie that separates it from the juvenile humor of the others. You can see the characters have grown. Sure, we get some potty humor—no one ever completely outgrows some good crude humor, but it’s not as rampant as the other films. There is a more personal and serious tone to American Wedding, but it still has fun.

Most of the main characters are back. Those that are missing are never mentioned, so that did leave a bit of a hole for me. Where were they? Why weren’t they there? Having seen these characters through 2 films, it would have been nice to have those loose ends tied up, but it didn’t consume me while watching the movie.

The characters that are back (Jim, Kevin, Finch, Stifler, Jim’s Dad) seemed to take a few scenes to get back into the feel of their characters, specifically Stifler. He’s probably everyone’s favorite part of these movies, and he was off a bit in the beginning. But, during a scene where he has a dance-off at a gay bar, he was right back to the Stifler we wanted. His character goes through some changes here that he hasn’t in the other movies, proving (yet again) he’s the one guy we all know who takes a little longer to mature than the rest of us.

Yep, we get a few moments of gratuitous nudity and some classic American Pie moments. Jim and the uncomfortable talks with his Dad, Stifler and his unfortunate experiences with body fluids, Finch and Stifler’s Mom, et al. And they’re funny, but they don’t stand up to the classic webcam scene in American Pie, or the super glue scene in American Pie 2. None of these big humorous moments in the movie stand out as being all that memorable, but this movie felt less about crude humor than it did a group of friends moving forward into adulthood.

The American Pie series has created a group of characters that everyone in the audience can identify with and relate to. From the drunken keggers to the talk Jim has with his groomsmen before the wedding, these moments remind us of moments from our past that we can look back to and smile. These characters have lived the awkward period of their lives in front of us. We’ve laughed and cried with them. They’ve become people we care about and people we can identify with. They’re us. They’re our friends. And like friends, they help us realize that as stupid as we can be sometimes, we’re all good people at heart.

And heart is what these movies have.