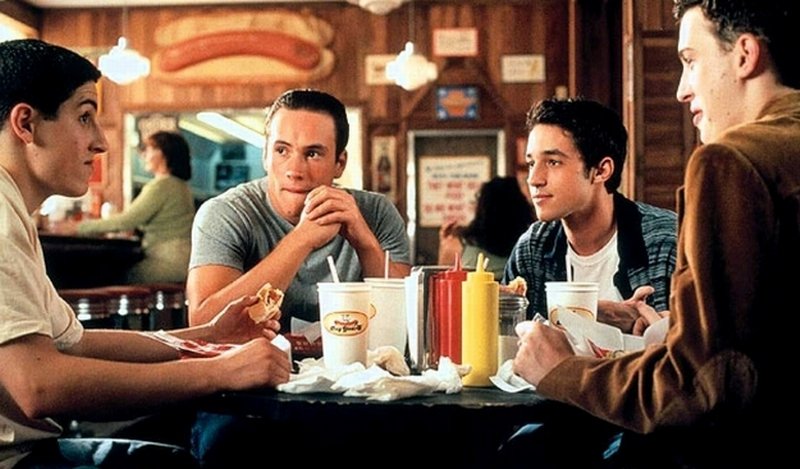 I have not seen a movie for a while that faces head-on the insecurities and sexual confusion of teenagers and does it with heart and class. The Breakfast Club, Pretty in Pink, and Sixteen Candles treated young people as people, and not as stupid uneducated fools. American Pie follows in that tradition. The characters in American Pie are well-developed, real teens.

Well, as well developed as they can be at their age. And as naïve.

Do I dare compare this film to the great teen John Hughes films of the 80s?

Yes, I do. And I do so with a full heart and a clear conscience. It deserves that respect.

American Pie even pays homage to the classic 80s films of its past by playing “Don’t You Forget About Me” at the student’s senior prom. The film knows what it is. It knows where its roots are.

The movie deals with four male friends trying to devirginize themselves before high school graduation. Yes, the film has disgusting jokes. And, yes, there is what is to become the infamous, namesake scene involving an apple pie (it’s not all that funny, actually).

But this is not what the film is about. It simply addresses the way things are and the way we speak in the 90s. It’s not pushing an envelope, it’s just being honest.

The film starts with more crude jokes but levels off near the last third as we begin to care what happens to these kids. Their attitude towards sex at the beginning of the film is juvenile, and hence the film jokes about what they do not understand. But as the characters begin to grow and mature, so does the film.

I hate to call this another coming-of-age film because they seem to be everywhere these days, but it is in the strongest sense. It’s a film that should be seen by all teenagers. This will be hindered by the fact that the film got a dreaded R rating, which the theater I went to was enforcing to the hilt.

It’s the same thing that happened in 1985 when The Breakfast Club was released. The Motion Picture Association of America puts these films out of reach of the audience who should see it. Why? Because of the graphic dialogue and frank scenes involving sex and teenagers. The Breakfast Club was the first of its kind I remember seeing that admitted teens smoke pot. Now you can smoke pot in a PG-rated movie.

Something is backward. Violence and strictly adult-oriented films should get an R rating, but not something as heart-filled as American Pie. The film does not promote sex, it educates about love and relationships.

The film involves the most likable teen characters I’ve seen in a film in quite some time. Strong female characters. Vulnerable males. This is a reverse of what has typically been seen on the screen. All the young actors and actresses involved should be proud of the work they did here.

Eugene Levy plays one of the only adult figures in the film as the father of Jim. Each scene is hysterical. Levy does a wonderful job in this role, expressing in each of his movements how uncomfortable he is speaking to his son about sex. The scenes are gold.

It’s refreshing to see a film where the characters are good and honest people. It makes you care what happens to them even more. The film could have easily been very mean-spirited, but it had the class to be real. It has a heart. It’s the kind of film where you walk away with something in the end. Something you’ve pulled from deep in the story and made your own. Something that touches just you.

That’s what makes a good film, and that’s why this classifies as one of the best teen flicks in a while.

American Pie feels like the last of the classic teen comedies. Maybe it’s because of the lack of cellphones, which was fucking refreshing. The characters are vulnerable and real. Some scenes feel a bit cringe today, like shaming Sherman and the Nadia webcam stuff, but it still has a lot to say and is full of heart.